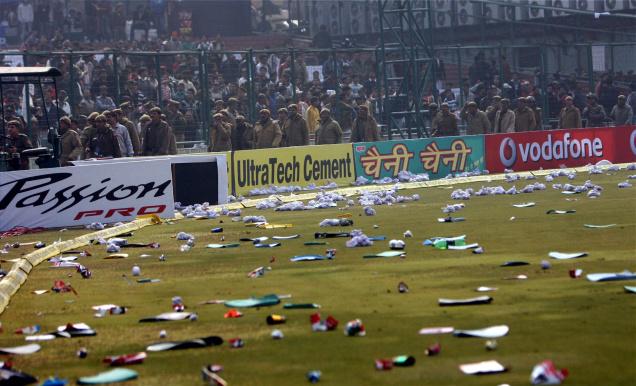 The top two sides met for their first scuffle of the season, on a track that looked in fine fettle, with massive boundaries. At the toss our opponents didn’t have any hesitation in choosing to field first.

Tweedledum and Tweedledee (Ben and Mark) opened the batting and an interesting first over ensued. The former pulling two bumpers for 4 to the long boundary before being castled by the quick but erratic Hickman.

The following 8 overs were pretty boring with 20 odd runs added but importantly no more wickets. Justin fell for an unlucky 13 bringing Rob in at 4.

Looking for quick singles to fairly tight bowling brought the Tweedledee’s wicket. ‘Yes’, ‘no’, ‘yes’, ‘no’, ‘sorry’ and Dee waddled off for a dozen.

Matt ‘wot no bat’ Young joined the party’. Half way to the wicket the light went on. Pads? Box? Helmet? Gloves?- check, bat??? “ermm might need that” he thought, so trying to look cool under the circumstances he scuttled back to pick up said bat before going to try and repair the innings.

60 massive runs later with Matt contributing a huge but effective 7!! GP took themselves to 99 before he perished. 14 overs left and perhaps 160 looking doable with Rob in fine form, all we need is to bat round him and jobs a good en.

Well no we don’t do things by the book do we? Josh went for an egg before Si blocked a few, missed a few then hit 2 sixes in consecutive balls before going for another unlucky 13. But at 131 for 5 and Rob still in, things looked rosy. Then it went dark overhead and dark on the pitch. Rob went for a well-played, season high 72, before the brakes were slammed on in spectacular form. 6 runs in the next 8 for the loss of 5 wickets saw the innings come to an end all out for 136, Highlights include two more blobs in the innings courtesy of El Capitan and Ricky, with Shahid making 1 and Tony making an average saving 0 not out.

A sumptuous tea followed canopies, lobster, crab, fois gras, warm cup of tea and coffee didn’t follow. Instead a Tupperware box full of ‘sandwiches’ that looked like they had been involved in a car crash. Tesco’s own crisps, Scotch egg and some jam tarts to afters, mmmmm lovely. But our opponents did do the best they could under the circumstances.

Josh and Mark opened the following, blokey going walkabout before Matt stumped him for 4 and with Josh adding another, things looked promising. Both bowled 8 before being replaced by Ash and Shahid, Ash bowled without any luck for before Pinny came on and took 2 wickets for 5 off 5 overs, one wicket a blatant cheat from Justin claiming a catch from a bump ball!! I cant believe we have slumped so low & whilst Mushy took two, he did get some tap for 41 off his 7.

Still GP had a sniff, 50 odd and 4 wickets left. In stepped the quiet, low key skipper to help things along, and to be fair he did it in good style, 53 runs from Davies with 4’s and 6’s peppering our Polish brethren sipping their Tenants Super.

During this time Ev pulled a fetlock and ended up at first slip, hobbling round like an old nag waiting to be shot. His time has surely come to hang up the 46” waist trousers and hand over the baton/bat?

Dot’s play of the game – Rob’s innings of 72, just think Rob another 20 and you could have won the game for us.

Dot’s ‘other’ play of the game – Two winners, this week. One has to go to Matt I’m afraid. Walking in to bat focusing on forging a match winning innings with Rob – only problem – no bat. And PC Day, we follow our captain wherever he goes without question, except when he goes and sulks off to his car at the end without shaking the opposition’s hand. Poor form from the soon to be Plod! I’m sure no one will mention it again as they value their driving licences and never drink drive!