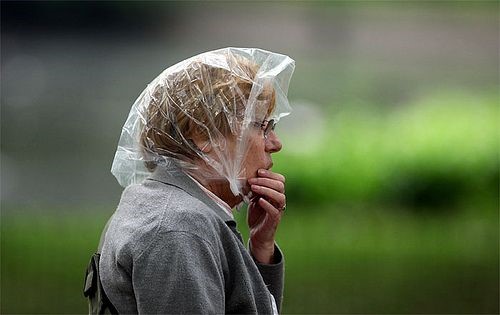 Having spent most of the week sweating like a gypo in a room full of spoons, we reached Saturday where the weather took a dramatic turn.  I had heard those nice boys Rob and Jon, had taken precautions on Thursday night, which I thought was “good for them”, as you can never be too careful.  Turns out, I was mistaken, and they had been wise enough to put the cover on the wicket.

Looks like they made the right call, as looking out my curtain all I could see was grey and damp conditions that morning, so I went back to watching the previous night’s Emmerdale which I missed as Ethel wanted to go to Bingo and I..  sorry, got off topic.

I looked out my curtains again at 1pm and I could see very little movement going on, but did see 1 or 2 of the lads hanging around the edge of the pitch and looking up at the sky. I did see one lad sitting in his car all by himself for an age.  Couldn’t quite make out what he was doing, as my eyes are not what they used to be.  But could have sworn his was shuffling cards or something similar. Anyway, I thought I would take a little walk over, to see what was happening.

Turns out the skipper was keen to try and get something from the day, even if it was only a few extra points and was badgering the oppo to hang about and give it a chance.

Comparing weather apps, everyone told a different story on what the weather was going to do, but no one could argue with the fact the sky’s had begun to lighten and rain had slowed to a fine dampness in the air.  The oppo agreed to review at 2pm but clearly wasn’t keen as they only had 10. When 2pm rolled round, the sky’s were lighter and rain had practically stopped (but not fully).  Barby were keen to call it, as they felt it was still raining but I hear Tony and Rob, stood firm and said the game could still get on, as the weather appeared to be improving.  Reluctantly, Barby agreed the pitch was playable and would give it a little while longer.

Shizzle was already busy running up and down the covers with the bow dry, something about being bored and then the boys were quickly out taking the covers away while Barby looked bemused by the efforts.  Rob cut the strip and then him and Steely entered into the worst partnership to mark and paint the creases. I did think it might come to fisty cuffs at one point, but they got thru their little spats and the wicket looked good.  By now it was gone 3 and the two skippers had agreed to a reduced 20/20.

Barby won the toss and as any sensible team would do, opted to bowl. It was still very grey and looked like it was about to rain any moment, but the teams braved it and hoped for some play.

Given the format, Tiger changed the batting order and took a punt on Rob and Anand to open the innings.  He was rewarded, with 2 great batting displays!!  The partnership reaching 100 by the 13th, where Rob perished soon after having got caught and finishing on 54 and Anand hanging around till towards the end, finishing on 87, having got bowled when swiping at a straight one.  In between, John Mason made his season debut and scored a quick fire 18 and looked in good touch, before also missing a straight one.  With Manik and  JB in next, both were given the same speech that we had a good score, so nothing silly and lets not give wickets and points away.  They both opted to push for 2nd runs, that were never there and perishing pointlessly. Shizzle, didn’t fair much better, being bowled for an egg and Lucca and Riki, finished the innings off, with a single each to finish the 20 overs for 177.

A super effort, given we haven’t scored that high in our last 5-6 games with 40 overs!

A quick tea and the skipper was hurrying the lads out while the weather still held..

Clearly Rob had not done enough – in cutting – rolling – painting pitch and hitting 50, the skipper put him straight into bowling!! And the skipper backed himself to open from the opposite end, with Sweet-trolly and Fandago given the nod to replace them from the 10th onwards.

Tiger was first to strike, with his first ball popping back to him.  However, he had to juggle it before he got it under control.  Tight bowling in the first 4 overs, saw Barby only score 8, when the required run rate was 8.8 per over! Barby found the boundary rope in overs 5 and 6.  However, were still well behind and never looking light they would chase it down. Rob was rewarded in the 7th, having bowled a great line and length, which brought in Barby’s last big hitter in Hill. Rob and Tiger finished their spells and kept Barby to 44 after 10 and well below the RR. Oli and Manik followed up and kept up the same decent bowling and a little bit of luck, saw some confusion and their danger man Hill, getting run out (on a quick fire 21), following a bad call.  The question remains, who made the call?  Steely shouted “yes, yes”, which was aimed at our fielder collecting the ball and wanting it in quickly to himself.  However, did this cause the big man to think it was the other bat? I saw the GP lads pulling sheepish faces at each other, yet no one dare mention it (in fairness, he was a big fella and wasn’t happy, so why would they) and the lad was quick to depart blaming his partner for calling and not running.  The other bat simply looked confused.  Oli struck soon after, having bowled their keeper, who was their top scorer on 32.  Into the tail and sweet trolly, bagged a few rabbits, taking a caught and bowled, dropping a caught and bowled and clean bowling the 3rd and Fandago being rewarded with 1 also.  This brought in their skipper, who was determined to not give his wicket away and was happy to see out the last couple of overs, simply prodding and blocking and not even attempting a run.  Barby finished on 68-7.

Not only is that a good result for my boys, but a quick look on the tin-ternet thingy, tells me no other teams got any type of game!  So, 28 points on a day where no one else in the division got a game in, might come in very handy towards the end of the season!

So, for Dot.  There can be only 1 player of the day and that’s Rob.  His work in pitch prep, batting and a wicket, meant not only was the game on where all others failed, his batting also helped to win the game and good bowling put it beyond Barby to chase.  A fair tri-fector!

I see next weeks game could get tasty, as it’s a top of the division clash against Rushden.